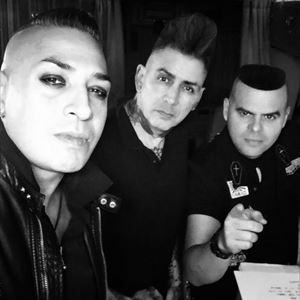 Nekromantix (Hellcat Records)
Never self-serious while far from a joke at the same time, Nekromantix is a musical unearthing of the biggest themes from the greatest works of monster, zombie, vampire, werewolf and b-horror fiction; ripped from literature, comic book pages or classic celluloid. Nekromantix chases a darkly romantic muse with an even darker humour.
The Nekromantix catalog boasts enduring genre classics like the unapologetically hooky yet undeniably fierce “Who Killed the Cheerleader?” and “Gargoyles Over Copenhagen” alongside subversively sentimental cuts like “Haunted Cathouse” and “Subcultural Girl.” There are echoes of rock n’ roll’s greats and punk rock icons alike, all with modern flair.
A Symphony of Wolf Tones & Ghost Notes broadens the Nekromantix legacy with expansive ambition that never sacrifices the trio’s inherent grittiness, furiously stoking and reshaping the flames of the creative vision begun in Denmark with legendary labels like Nervous Records, through the band’s master classes in punk n’ roll albums stateside with Hellcat Records, the label cofounded by Tim Armstrong and Brett Gurewitz.
Armed with his signature coffin bass, chilling baritone, monstrous expressions and ten-stories-tall haircut, Kim Nekroman has earned tremendous respect, admiration and goodwill from a fiercely dedicated legion of hard-partiers, rabble-rousers, well-meaning degenerates, grease monkeys, outlaw bikers, nostalgic tastemakers and forward-thinking punks. It’s a crew of supporters as diverse as the otherwise classic and timeless music the Danish-born California transplant has unleashed as leader of Nekromantix.
Nekroman’s notorious quiff is as instantly recognizable as the coffin bass he’s slapped into submission on nine studio albums, countless worldwide tours and festivals. The quiff, of course, combines the midcentury rebel style of the pompadour and flattop with the punk attitude of New York and Europe from the late 70s. It’s a fitting symbol for the style of music Nekromantix has perfected into an art form, a rollicking psychobilly sound with reverence for the genre’s origins and predecessors, infused with an iconoclastic boundlessness that refuses to abandon the electric catharsis of unadulterated fun.
Return of the Loving Dead (2002) marked a career resurgence and subcultural breakthrough for what was previously a feverishly cherished underground band best known outside of North America, via now legendary records like Curse of the Coffin (1991), Brought Back to Life (1994), Demons Are a Girl’s Best Friend (1996) and their unstoppable debut, Hellbound (1989). The new millennium brought the band to America (at first to tour and eventually, to stay), conjuring into the world new Nekro landmarks in the forms of Dead Girls Don’t Cry (2004), Life is a Grave & I Dig It! (2007) and What Happens in Hell, Stays in Hell (2011), as Nekroman steered the band through shifting lineups and energized shows with bands like Rancid and Reverend Horton Heat.
To their dedicated army of supporters around the world and across every dimension, Nekromantix stands tall among the ghosts in rock n’ roll’s undead cemetery.